Like other rotor machines, the Enigma machine is a combination of mechanical and electrical subsystems. The mechanical subsystem consists of a keyboard; a set of rotating disks called rotors arranged adjacently along a spindle; and one of various stepping components to turn one or more rotor with each key press. There are 26 lamps and keys, rotor wirings inside the rotors (of which there are either three or four) and between six and ten plug leads.

The mechanical parts act in such a way as to form a varying electrical circuit. When a key is pressed, a circuit is completed. Current flows through various components in their current configuration, ultimately lighting one display lamp, revealing an output letter. For example, when encrypting a message starting ANX…, the operator would first press the A key, and the Z lamp might light, so Z would be the first letter of the ciphertext. The operator would next press N, and then X in the same fashion, and so on. 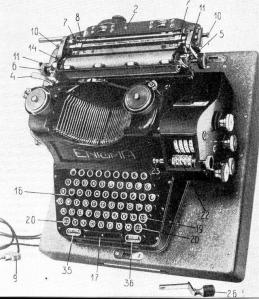